The one ring and tough times

It's so hard for me to stop painting and drawing all day and actually do research. I'm very lucky I have some good books to read and some games to play because looking at articles all day long is really not my thing.

A pen and paper Rpg when you sit around a table, playing as a character, with one person being the game master. The players play as their characters and the game master is the narrator as well as every other person in the world we're playing in. Our adventure takes place in Middle-earth (the hobbit, the lord of the rings) A little while after the battle of the five armies. My classmate Ernst-Jan is the so called game master, or dungeon master. The storyteller basicly. His brother and sister, his dad and me are the players. We are  basicly a mismatch of characters (a dwarf an elf and two humans).

Our choices and actions our being resolved by throwing the dice. So if I want to jump off a cliff (which would generally be a stupid idea) I would have to roll the dice to see how dead I am. Bad example but gets the point across I hope.
Anyway, we're playing the game for about two years now, and each time it's incredibely exiting. Because it allows us to create our own story. Our choices affect the world of middle-earth as well as all the people in it. But the best thing about it is that we each have our own vision about what the world looks like. Just like reading a book. We're basicly creating whole worlds in our heads. Would the game be different if each situation was described by a very detailed artwork. Yeah it would probably be different. Instead of imagining what it should look like we basicly get it presented on a silver well drawn plate.

Because I'm into painting environments and stuff I decided to sketch out one of the evil castles where my poor character was being held captive and tortured for over 2 years. 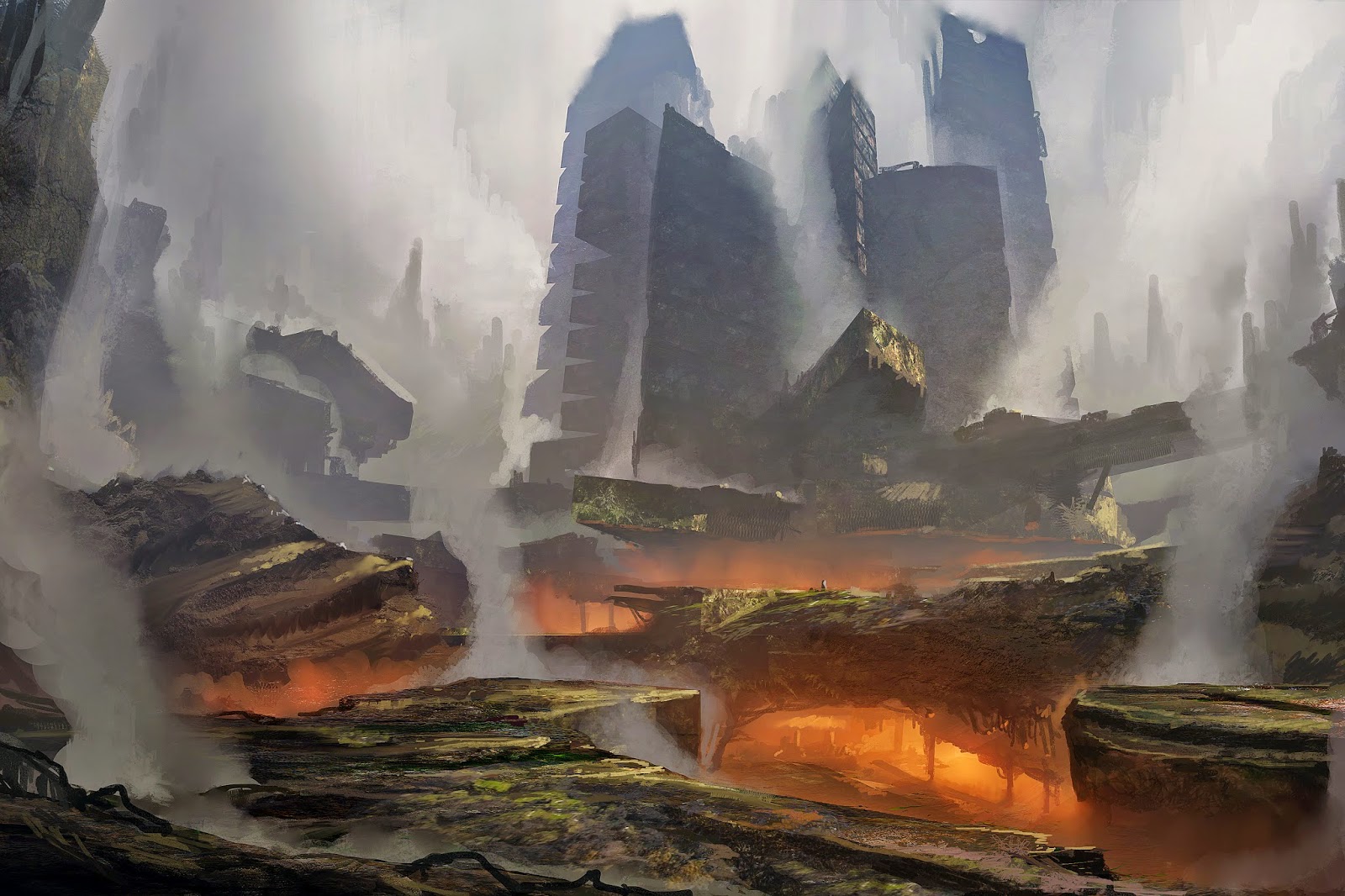 The funny thing was, this was totally different from what the other players and Ernst-Jan had in mind. So it's safe to assume that everyone has another image in his head while reading of playing the same story.

Still. Pen and paper roleplaying is a perfect example of working as a team but still keep your characters personal interests in mind. The good part of roleplaying is, you can literally do anything. within the setting and the rules of course. I mean if my friend would say. Im going to fire this nice bazooka. The game master would say: dude, we're in Middle-earth. So what the hell?
Also, the game master can basicly do what he like. Is a player acting like a douche? The game master can simple decide that two nearby trolls can't really cope with the existence of the tough acting character and resolve this problem by simply pulling him apart. Bye player character. So there is a lot of freedom in roleplaying games but the fun factor and the immersion of the game kind off depends on the game master. We are lucky to have Ernst-Jan as a game master as he does a great job at this. But a game master can ruin the game for you if he doesn't know what he is doing.

It takes a while to get started. There are all kinds of forms and statistics to be filled out before the fun starts. And there are always the rules that sometimes hold you back.

So basicly. A pen and paper roleplaying game give you a set of rules and statistics but otherwise complete freedom to create stories together within a setting.

On to the questions, because a pen and paper roleplaying game needs a game master.
Can the game do without? Can a computer system do what a game master does? Can players make their own story? Can they work as a team to reach their goal?

I still want to make a game where players are being faced with tough choices, without having to go trough all the rules and statistics that come with a pen and paper roleplaying game. But can I make them interact with eachother just like in a roleplaying game? And can I manipulate their choices by visualising the situations they're in with artwork?

I'm reading a book called framed ink. It's about drawing and composition for visual storytellers. So can I tell my audience a story with visuals? How can I do that? I'm sure this book will give me some insights about that.

to summarize about roleplaying games:

Pro's: Great way to imagine stories. Working as a team to solve problems. A lot of freedom
cons: Heavily dependant on the Game master. And there are a lot of rules to keep in mind.