A story to an image

The image I chose is a digital painting that I posted a few times before. 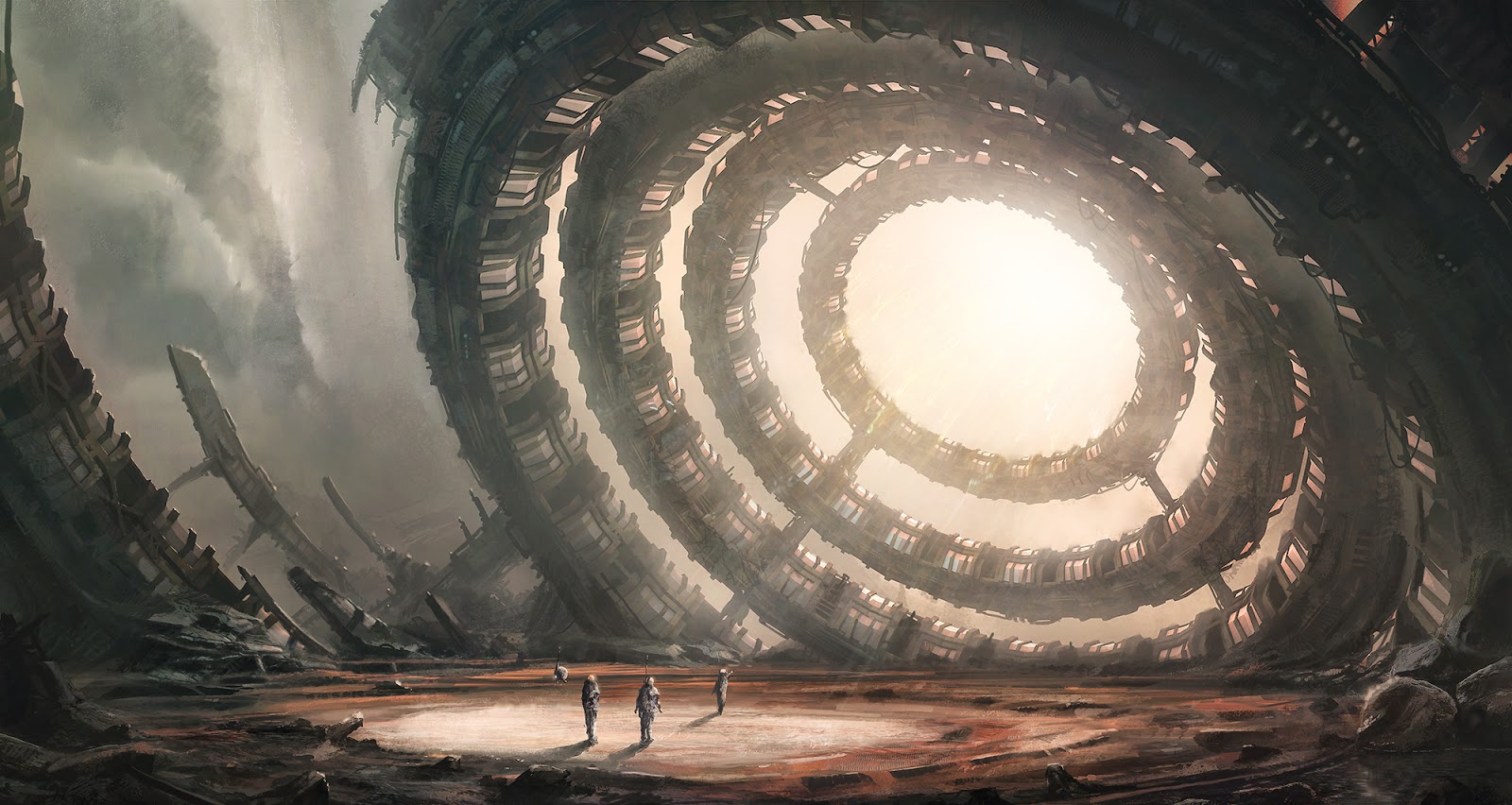 I posted this image on my facebook profile and on numerous facebook groups. I chose this platform because I wanted to have as many reactions as possible.

The thing I wanted to know from people was: What's your interpretation of this painting? What is going on there? What's the relationship between those people and the structure.
I asked people to write their story down in the comments, hoping to receive some reactions.

And I did! In fact I received messages from over 120 different people! Some people were more serious than others of course, but still I was very surprised with the number of people that took the time to comment.

Reactions did vary heavily. From philosopher's quotes to "this reminds me of that game or this movie reactions"
Let me show some examples below:

"What once was their race's first space habitat now lies broken and desolate on the surface of a war-torn planet. The scouts gaze into what once held a powerful fusion reactor, supposed to light the entire habitat. Its light rekindled by the rising sun, where it once shone upon millions, it now shines on only three."

"An ancient beacon site. Before light transportation was invented they used masive molecular beams cannons that fire huge data packages on the atmosphere. Here lies some of the central rings, this place looks quite now but seems like when the machine was destroyed releasing a massive wave of energy that made the area radiactive for quite some time."

"A lost world, with a shining light that will bring them to something better. The travellers hesitate."

"Astronauts stumble open the worlds greatest discovery, a portal that will lead them on a journey to infinite universes. The portal is known as "The Destination". A portal with infinite possibilities and infinite journies that would take infinite life times to experience. The question is, are the brave enough to step inside this Destination? Who knows what journey awaits them on the other side."

"Standing in awe before the alien machine-god"

"The eye of a giant robot"
"They just arrived at a new planet, wich seems abandoned. While exploring they stumble on all kinds of broken down buildings and structures, this is one of them. They don't know what to make of it, what it could have been.. They approach it with great caution."


Just some of the many short stories that people came up with.
Another interesting thing happened! People started to discuss their interpretations with eachother and came up with their own collaborated stories!

"I think, wow Leon must have had a free hour to work , what I real think: Some people checking out an old SciFi crashsite, probaly lost their parents in the accident. The one at the left is named Bob for sure."

"I don't feel bad for Bob, he's got a kickass floatsy robot sidekick."

"The woman on the far right is jealous of Bob's drone."

"She's by herself, plotting a dastardly murder while the others are distracted by the stupid uninteresting ringthings."

Of course those people were just having a laugh but I thought it was quite interesting.

A conclusion is that everyone has a different view on a painting, but I think the stories varied so much because the image was not clear enough. I don't think it's a bad thing but there are things that could have been done better. Maybe the spectators need more information. If the astronauts were holding weapons or were running away from the round structure the story would have been quite different. There was not much clarity about the situation in this painting. Is it dangerous or are those guys quite alright?

Even though all those different views and stories are very interesting.

Stepan Duquesnoy a gratuated student from my course suggested to work more with visual narrative! Good thing I'm reading framed Ink and Understanding comics at the moment. But you don't learn by just reading, you have to apply the theory to your paintings. So that's a good thing for me to do.

Stephan also suggested to dive a little bit more into the history of storytelling with art. Looking at Bierstadt or Carvaggio for example: Bierstadt wanted to make european people fantasize about America. And Carvaggio wanted to bring the bible to illiterate people, by creating art.

So I have to look at what I want to tell the audience. What do I want them to experience.
My classmate Jim asked me if I want to make people come up with their own stories by looking at my artwork of if I want to tell my own story with artwork. Because that's a pretty big difference in my opinion. That's something I need to find out but this is a good start.

In the end this little test turned out to be way more usefull than I thought it would be!

My classmate Jim and I also did some other tests regarding storytelling and tough concequenses. More about that tomorrow.